After going outside into the landscape I decided to focus on the indoors. Coming from the exploration of the windows and the outside/inside experience of my white cube experiments I decided to move inside. The first piece was inspired from a drawing I had done back in January. It was drawn from a photo that showed my flat looking to be a very homely place however in the drawing I focused on the shapes and produced a very empty looking space.

I realised that actually I had a number of photos that looked at these empty building structures that were meant to be home. 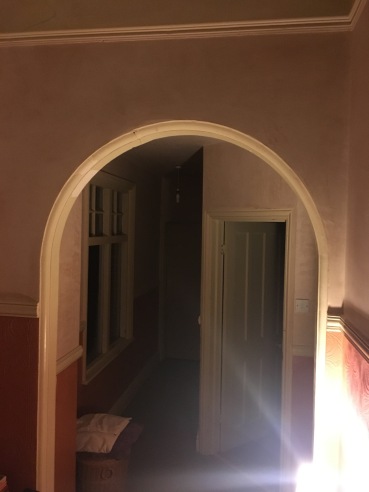 These soon began to develop into empty drawings, with doors opening to nothing in particular. I found that my drawings were very structural and architecture based as well as focusing on the shapes. It was as though I was bringing the city skyline into my home, again following this idea of bringing the sea into the city: bringing the outside in and combining two elements.

I proceeded to recreate the image in coloured pencil and gouache:

Again this was about the composition of unlikely shapes and also the colours. It was certainly a strange combination of items, which has since been developed into the pile of things we don’t know how to dispose of / might need again. Art students. It caught my attention and I liked the idea of this unconventional still life. Again something I think I could and would like to continue to develop.

Another level of inspiration that followed similar ideas as this was a recent trip to Newcastle’s BALTIC in which I saw the work of Jasmina Cibic. She had work featuring a fascinating structure but set it by a film which featured stairs. I have always had a strange love for stairs, I love seeing how they have been designed, how they are set into the space – more so than any other aspect of architecture. I really enjoyed the cinematography of the art film and that idea of stairs was something I felt compelled to explore. I had been looking at these surreal city shapes in bold colours and decided to try this with the stairs

It was a simple experiment and it did help with colour palettes. It was interesting to try something a bit different while still sticking to this idea of exploring the city shapes.